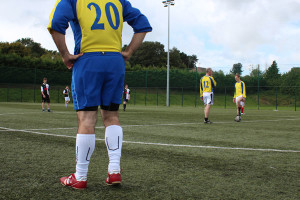 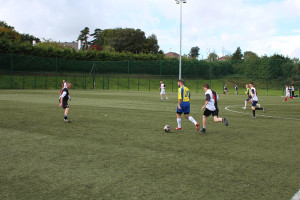 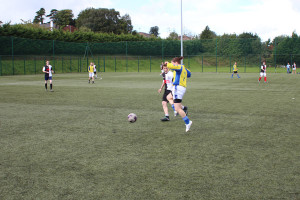 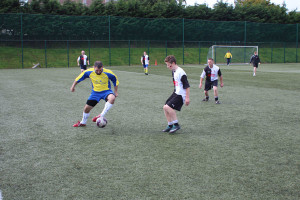 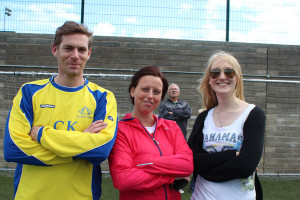 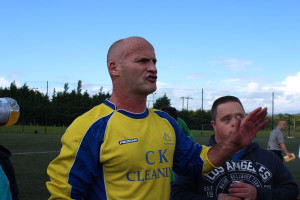 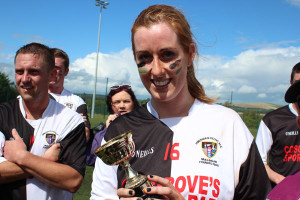 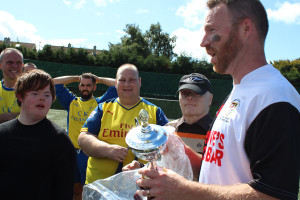 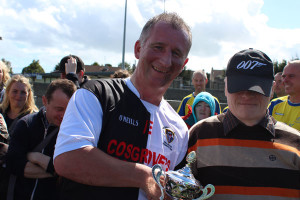 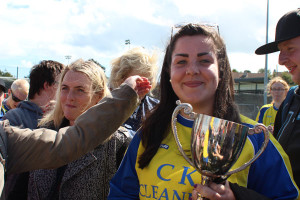 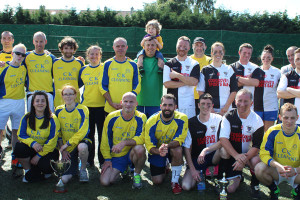 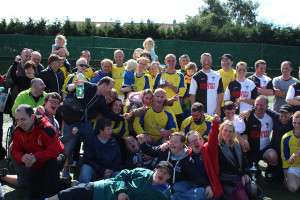 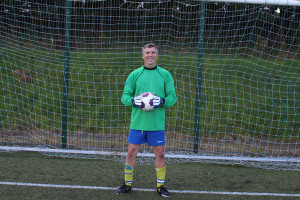 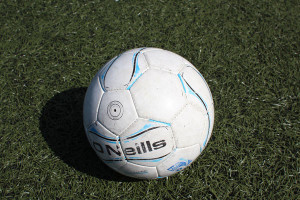 Outrageous goal, Dodgy refereeing, Heavy hits, HAKA, Chip Van, Music, Fake tan, Face paint, Men cross dressing yes you have guessed it was the big game between Northern Stars and Due South.
On Friday last was the day when all the talking was finished and it was down to the footballing ability well sort of. The Northern Stars headed down the N11 to Arklow as defending champions of the SHS cup.
Before the teams took too the field Martin O’Rourke was like Alex Ferguson going around organising his troops and getting local players to play for them because their Granny works in Sunbeam.
The crowds were at full capacity with the sun beaming down, the players warming up with a slight arm rotation and some yawning.
As both teams were walking onto to the field DJ Sam was blaring out Barbie Girl this would definitely get the blood boiling. Tip off was ready to take place when Pat Kinsella and Martin called in their players for little team talk, then to the sight that will never be erased from the supporters minds Martin and Pat hopped out in dresses that were borrowed from Marian O’Mahony and started to perform the HAKA well sort of with their players who had black paint smeared underneath their eyes ready for battle.
The game got up too a steady walk when Barry Jones netted his first goal for the North with Brian Kenna providing the through ball. Without taking our second breath Barry stepped up again with another finish leaving John Maher from Rosanna picking out the ball from the net in a matter of moments. The Northern Stars were dominating the opening 20 minutes of play with the captain Rebecca Mckenna leading from the frontline. It was then when James Doyle came to the frail he was up to his old tricks again wasting chance after chance until a bit of luck went his way, he said he was claiming the goal but they could have been 6 people in for the goal with the ball coming out off an elbow, knee and head of someone.
North were then 3 – 0 when the Dermot Prendergast started to tighten up the back line. With some slick passing starting from the back line which was been lead by the keeper Danny Eckersley who knew he had to up his game from 2 years ago in which he did without the soles in his boots. The ball then got to midfield with Brian Kenna and Aisling Howlin giving one two passing with the amazement from the South players. With the bow legged James wasting another chance it rebound of South keeper John Maher, Brian Kenna buried it in the bottom corner. North 5 nil up. That’s when the South changed the ref and they started to come out and play or maybe it was the introduction Sean O’Reilly that rallied Due South but it probably was the ref. Seamus Murphy and Jason O’Gorman started to create chances but they couldn’t get past our English Danny.
Just 10 minutes into the second half Brian Manning scored it first ever goal for North and he done it in style with a miss timed kick that floated over Johns head. The ref changed with Tom Nelson taking the whistle and the only difference between him and a battery was that the battery has a positive side. South team were creating chance and a scuffed shot by Jason O’Gorman lead to passing up the field with a cross field ball by JP Hunt to the youngest member on the day Patrick O’Rourke flying up the line and putting it past John. South then won a corner and Dermot buried it with his head and this lifted the South team and signalled Jennie Vickers to steam over to South bench and make changes to the team.
During the second half North were considering getting another ball on the pitch for just James as he wouldn’t pass it. The weather started to changed but it didn’t damper the excitement of what was going on the field. As the rain fell Martina Canna started to panic as the fake tan on her legs started to run more that what she was running. 50 minutes into the second half I know 50 minutes? as the ref wouldn’t blow the full time whistle South kept pushing with chance after chance from Ollie, Ross McDonagh and South’s pocket rocket Nick Skelton the scores were at 6-5 when Tom finally blew the whistle.
When the final whistle blew the face paint on the Due South players started to run as the tears started to stream down their face.
Players that shone on the day were definitely the 2 goalkeepers John and Danny, Dermot who was a rock, the Maranatha men, Aisling and Rebecca from Sugarloaf, Seamus and Ollie from Rosanna, JP Hunt and James Doyle.
James made the presentation to winning Captain Rebecca, Joe Nolan Memorial cup to Dermot Prendergast for man of the match and the most entertaining player went Martina Canna as her fake tan done more running than herself.

As Martin on Friday in an email  “All is left for me to say Patrick is get does Northern stars down the N11 and we will see who is the boss” and the North showed you who was the boss this year Martin.
PS Martin football is a simple game: 22 Men or Women chase a ball for 90 minutes

Celebration’s lasted well into the night with staff from both sides joining in the fun.  Overall it was a great day out and hopefully we can build on next year .