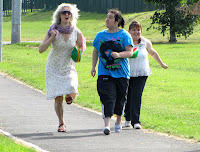 Fiona O’Farrell and the staff and service-users in the Training Service, Bray heard about the plight of the people of Pakistan in the wake of the recent flooding and decided to do something to help. They organised a sponsored, 2km walk in a local park to raise money to donate to a charity that is helping in Pakistan.
Many thanks are owed to the friends and families who donated money as over €2000 were raised! No mean feat.
The fastest walkers were Pierce and Dan who came in joint first. Also, there was a small prize for Ian who collected the most money and Deirdre who collected the most donations.