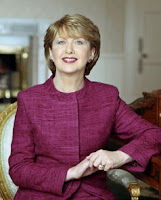 Saturday 10th July the DCB advocacy group were invited to go to Áras an Uachtaráin for a Garden party hosted by President Mary Mc Aleese.

Artur drove the bus into the phoenix park and we parked at Rata house. We had to sign in and have our passports checked. We then got a coach over to the Aras. When we first seen the house it was amazing! Its really really big. Helen was gobsmaked!!! “it was like a palace” We went inside the house and joined the queue to meet the president. It was packed.

Marie was the first in and a woman introduced us all individually to the President. “She shook my hand and said hello, I told her she does a lot of hard work” Natasha thought she was lovely, a really nice woman.

We then went outside unfortunately it was raining but the staff in the Áras were well prepared and escorted us with umbrella’s to the tea rooms.

There was all sorts of different foods and lots of it! it was delicious. Then a solider announced that it was time to make our way to the Marquee as the President was making her speech. Thankfully the rain had eased then.

We had different entertainment then. A Brass band, opera singers, and a Trad band. After this we had a tour of the formal rooms of the house. We saw were the president would sign all the new bills of law and were the new Taoiseach’s are sworn in. It was a amazing day.