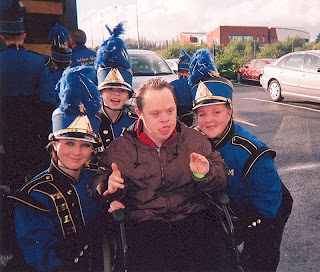 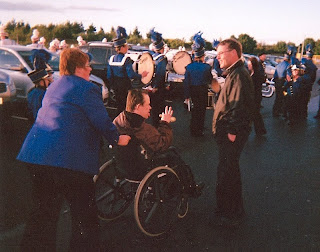 Very early on Saturday, September 11th Glen and his keyworker Jean left to join Glens band-mates from the Inbhear Mor marchers to go Athlone to participate in the All-Ireland and European Ranking Competition.

Glen travelled on the bus with the band and enjoyed the interaction with the band leaders Oisin and Mary amongst others.
On arriving in Athlone Glen had a very busy afternoon practicing his music in preperation for the evening competition. It kicked off at 6pm and Glen kept a close eye on the other bands and he seemed really interested in the bands from Tllaght and Clonmel in particular. Glen, supported by Mary, led the Inbhear Mor Marchers onto the field and the group received a huge applause from the spectators once their piece was finished. Glen was delighted with the response from the crowd.
All Glens hard work and regular attendance at weekly practice had paid off and all that was left to do was to retire to the hotel and grab a well-earned ice-cream.