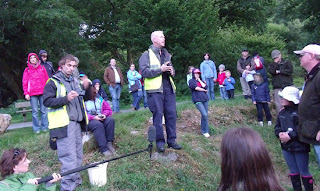 A group of us from The Garden Team went on a tour organised by Glendalough Education Centre to take a look at the bats. It was held on Thursday 12th August and we were intrigued to discover that the little lodge house near the lake is home to over 396 bats in its attic.

At around 9.10pm they all flew out from a vent in the roof ridge one by one. These bats are known as the soprano pipistrelle bat which is as tiny as your little thumb. They flew out as fast as a sports car, flying along and swooping in the sky. We were told that it is a myth that bats can become tangled in your hair. Robert joked that it was like count Dracula in the trees.

We then walked into the forest and kept stopping with our guide who had a high frequency batometer sonar system which can read the bats echo-location sounds. When he turned this special radiometer on we could hear a constant clicking noise which was the bat making this noise to locate its insects that it was hunting. We also walked down to the river to listen out for the water bat and the long eared whisper bat. They like to swish and sway down into the river to catch the moths and insects that are attracted to the water.

After an interesting evening we headed back to Glendalough hostel to rest our weary heads after a fun bat filled event.