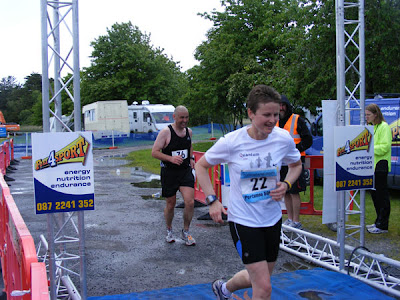 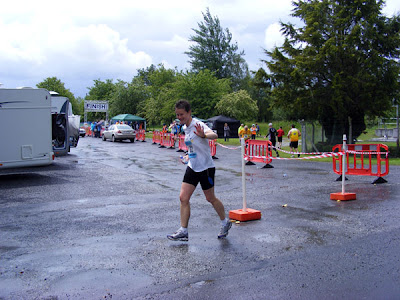 ‘After waking up at midnight one February I decided to run the Portumna 50k race. I usually have strange ideas at these times but this is the best. I began training hard over the next few months picking up a back injury at 20 miles of a 22 mile run. But with a bit of help, lots of swimming in the sea and many stretches I was ok again.
The training is intense and I only did 40 miles a week compared to the 70 suggested.
The morning of the race I was very nervous and was nearly crying on the way to the start. I had no idea if I had done the right thing or not and seeing all the runners I realised that I should not really be there!
Running an ultra is completely different to running any other race. As I stood on my own feeling sorry for myself a few lads came over and helped me feel at ease. There is no competition on an ultra as in the shorter races, you are only competing against yourself.
So it came to 08.00 and the rain also came down as we started on our way. I met a teacher from Gorey (small world) and we had a nice chat at the back of the field for the first 20k.
The other runners were so friendly and as we were running a 5k loop around a forest we kept meeting up. Everyone cheered everyone on and the atmosphere was wonderful. Even when the others had finished they still jumped up and down and cheered the slower runners on.
It was a day of heavy showers and many times we were wet through and then had to dry out in the sun.
I eventually finished in 5 hours and 41 minutes which is great for me as I was aiming for 6 hours and had been in hospital on a drip the previous Wednesday!
It is very addictive and I am now looking at the 39 mile Longford race next August 2012.’